For example, when I think about our month traveling around Italy, there are many highlights. One of them is that my kids spent 30 days straight, day and night with each other, many nights all 4 in one room. I watched them bond in a whole new way. I had worried that bouncing around and seeing different areas might be too much, when they all got excited when we were off to a new spot and of course, seeing the Pope and having him stop right in front of the kids to wave, made the entire trip worth it.

Ok, ok… I know I am sharing more good and I promised the bad today. So here goes, our hardest day of travel:

About 10 days into our month in Italy we were heading from Santa Margherita to Florence. The time we spent in Santa Margherita was all beach and relaxation. We absolutely loved our Air B&B, the piazza to run and play…really every single thing about that town and we were all really sad to leave.

The night before we left I discovered that Miles had dropped gelato in his stroller so while we were all swimming in the sea, the stroller was being attacked by ants. I had no idea how to get rid of them and the only recommendation we got was boiling water to clean the stroller, so my mom (God bless her!) carried boiling pots of water down all the flights of stairs to try and clean the stroller in the piazza at 10pm while I packed.

In the AM… despite pots and pots of boiling water, the ants were alive and well and had multiplied over night. There was nothing left to do (car coming in 10 min) but to abandon the stroller by a dumpster. Now we are down 1 stroller.

We packed up and a car took us from the flat to the train station. We waited for the train, it arrived and we hopped on. I couldn’t find our seats. Four kids, a months worth of luggage and trying to walk up and down a moving train…

Finally we took a break in an aisle and met some fellow Americans that seemed to be having the same problem as us: couldn’t find their seats. This group: 2 moms on a summer vacation with their sons that were about to head to college, ended up being a God send. We found a train conductor to ask about our seats… we had no seats because we had all boarded the wrong train. 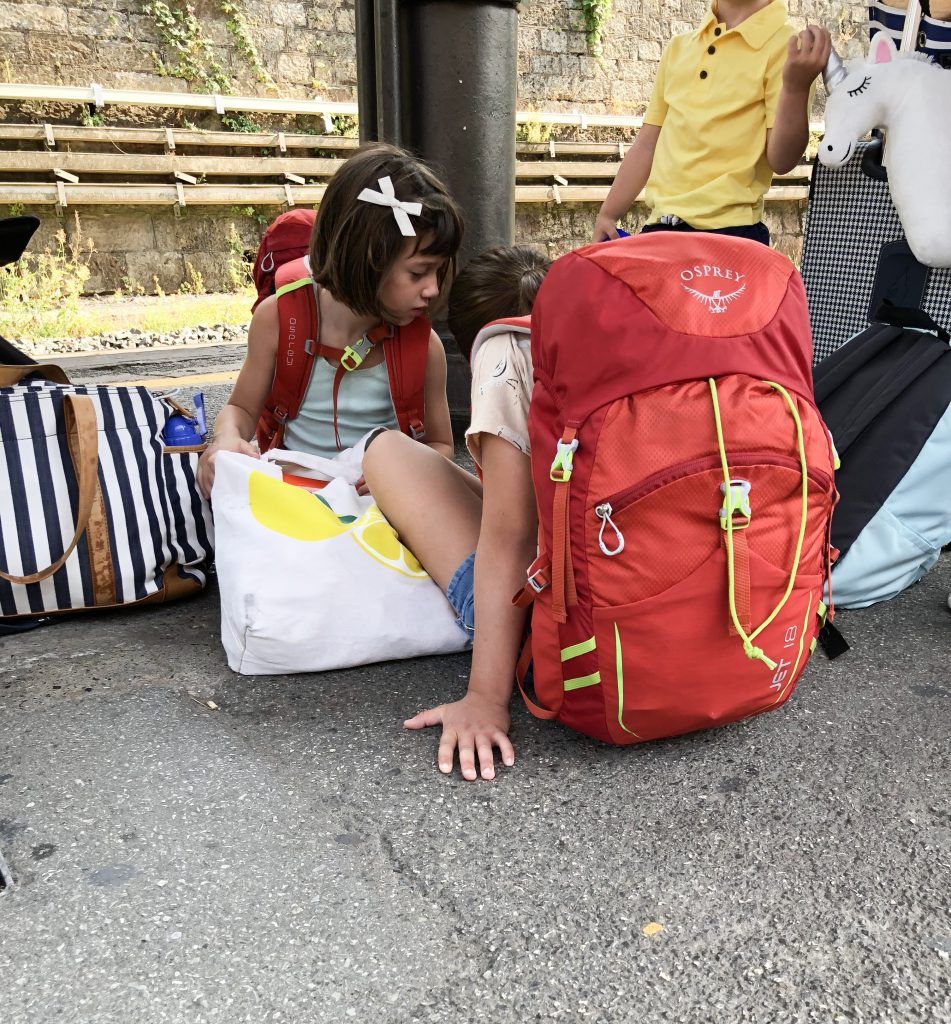 We had to get off at the next stop and catch the next train to Pisa where our connection to Florence was and HOPE we got there in time to catch our train on to Florence. Now we’ve been standing on a moving train and the kids are getting restless. Our kind new friends tell us they’ll help us and together we’ll get all the kids off the train + luggage and we’ll all make it onto the next train. It was chaotic, but we did it. We all got off the train with all the luggage and grumpy kids that have been standing in an aisle of a moving train. We now wait for another train… We get the train to Pisa, get seats and relax for a bit. When we are approaching Pisa, I realize that because we are on the later train to Pisa, we will have 3 min to catch the train to make a connection. Me, my mom, 4 kids, 1 month of luggage on our backs, down a stroller…. Do you think we made the connection? Nope!

But we tried, and trying included running down a ton of flights of steps with everything/everyone mentioned above, under the station to the other side where all those tiny legs had to climb tons of flights up to the other platform…. And when we found out where/when the next train to Florence was…. guess where that train would be? If you guessed back on the platform down and up a million steps that we JUST came from, you guessed right!

I’ll let you imagine everyone’s mood after that…

We boarded the train to Florence. As totally exhausted and frustrated as I was, I was really excited to get to Florence: my favorite city in the world. That’s where I had studied abroad and told my kids so much about. It was a spot my mom also loved after we spent a week there as a family years before. I was also looking forward to getting to the apartment we’d stay in for a few weeks, a spot we could really settle into. We were just an hour train ride and quick cab ride from relaxing… so I thought…

I’ll preface this next part by saying I have been been to Florence a number of times in my life: from Sept-Dec when I studied there, in the springtime and twice at Thanksgiving. I have never been there in July… July in Florence is a whole new world…. a very hot and crowded world. We got off the train into a train station I have passed through many times before… but it looked different SO PACKED. I knew where to get a cab, so I navigated the crew over there. There was a line for cabs like I have never seen before. It was wrapped around the entire train station. I asked someone further up in line about how long they had been waiting and they said over 2 hours.

There was no way my kids were going to stand there for over 2 hours in the boiling sun…. they were near meltdown already. I didn’t really see an option but to walk. As we started to walk I realized I was picturing my daily walk to school (right near the train station) as the apartment we rented wasn’t that far from where my apartment was as a student. I must have been dilusional from the hot sun to think that the walk as a young 20 year old would feel the same as the walk with 4 kids and a month’s worth of luggage on a 95 degree day….

We made it 2 blocks. After that we stopped to buy waters and snacks. I think I blocked out just how bad the scene was but picture large crowds, a lot of crying kids and at least 1 sitting on the cobblestone refusing to move. Don’t forget about that stroller covered in ants left by the dumpster hours away…

I spotted a taxi van across the street leaving a hotel. I told my mom to stay put with the kids and I made a run for it…. I think the taxi was a little bit nervous to take us as they’re really supposed to go back to the train station. But with a little convincing in my best attempt at the Italian language… he said yes. I went back for the kids, mom & luggage and brought them all over to the taxi.

FINALLY…. we made it to the apartment. Thankfully the apartment was perfect. The apartment owner could not have been more helpful. Took all our luggage and shared he had stocked the fridge for us. He had kids about the same age and picked the things he usually buys from the grocery store. We settled in, the boys napped and Grammy took the girls on a little Florence shopping excursion. We finished the day with the best dinner (& wine!) in my favorite city.

Traveling with kids is never going to be easy. I try to share travel hacks, tips and locations that will make it EASIER but it won’t be easy. It will be fun and memorable though.

My kids don’t remember how terrible this travel day was. They do have fantastic memories from the trip. When I asked them what they remember about this day from years ago I got a lot of laughs and these replies:

“Remember those American boys that carried the stroller with Miles in it?!”

“Our Italy shopping spree with Grammy the night before she left! We found found that Italy Disney store”

I should probably ask Grammy her memories… she must remember the horrors BUT she has traveled with us many times since so we didn’t scare her away. It’s been a couple years since this crazy, dreadful day of travel. As I’m writing this, I am remembering how the day felt like it would never end and would never get any better. I remember thinking “I made a huge mistake bringing them here” and to be totally honest…. while the rest of the trip was truly amazing, we did have plenty of other moments that were less than picture perfect. But I would leave on a plane to Italy with them all tomorrow if I could.

Note: If you’d like to see some of the highlights of our month in Italy check out #ourmonthinitaly on Instagram or check out our video post here: Our Month in Italy

Get Updates and Travel Tips sent to your inbox!

We use cookies on our website to give you the most relevant experience by remembering your preferences and repeat visits. By clicking “Accept”, you consent to the use of ALL the cookies.
Cookie settingsACCEPT
Manage consent

This website uses cookies to improve your experience while you navigate through the website. Out of these, the cookies that are categorized as necessary are stored on your browser as they are essential for the working of basic functionalities of the website. We also use third-party cookies that help us analyze and understand how you use this website. These cookies will be stored in your browser only with your consent. You also have the option to opt-out of these cookies. But opting out of some of these cookies may affect your browsing experience.
Necessary Always Enabled
Necessary cookies are absolutely essential for the website to function properly. These cookies ensure basic functionalities and security features of the website, anonymously.
Functional
Functional cookies help to perform certain functionalities like sharing the content of the website on social media platforms, collect feedbacks, and other third-party features.
Performance
Performance cookies are used to understand and analyze the key performance indexes of the website which helps in delivering a better user experience for the visitors.
Analytics
Analytical cookies are used to understand how visitors interact with the website. These cookies help provide information on metrics the number of visitors, bounce rate, traffic source, etc.
Advertisement
Advertisement cookies are used to provide visitors with relevant ads and marketing campaigns. These cookies track visitors across websites and collect information to provide customized ads.
Others
Other uncategorized cookies are those that are being analyzed and have not been classified into a category as yet.
SAVE & ACCEPT